Yesterday bore fog all day, today starts with light rain but the clouds are clearing and there is brightness in the sky. I check the forecast, it predicts rain mid afternoon for the rest of the day, celebrations will be low key today, childrens entertainment, lectures, a cabaret, church service and music on the harbour starting at eleven, goes on until four am. 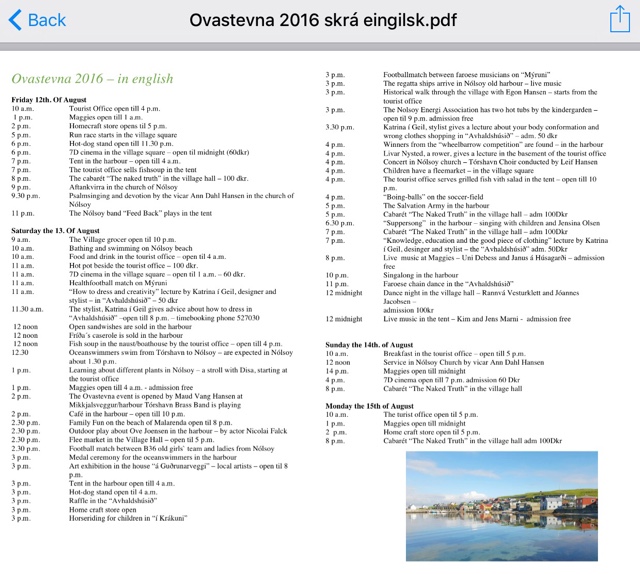 The tenor of this household has changed, as i knew it would. Sari and Leevin returned yesterday making it now a family home. I think both Lionel and i felt like intruders and scuttled to our rooms last night. Luckily, in trying to sort my phone battles he gave me a missed call so i text him, im going for a pint, and he joins me. A swiss musician, carpenter, real estate manager he travels for two months every year. I recall my forgotten notion that i might also do that, which was how my original two months here came about. That sounds balanced and manageable. Freedom yet family.
I also recall, in responding to his questions anout how i came to be here, that the only reason i didnt find a workaway place in the Hebrides or Shetland was because i was too choosy, because i wanted a placement with meaning for me, not just a place to be. It was only when the workaway site suggested the Faroes were close by that i lost my sense of careful choice and just said, hell yeah, ill go there. So maybe workaway might work after all if i just make careful choices.
An hour later and i find i have sent several workaway requests, exploratory, both for the immediate and mid future but im unsure im serious about any of them. Well, maybe one, handmade glass lights to be sold as christmas decorations, shropshire hmm no water there. And maybe a Belgian backpackers, just to see whaether backpacking hostels still appeal as thy did. And the scilly isles, hmmm. Ill see what responses are. Ive veered well away from anything to do with other peoples children, no matter how cute, noisy little feet running everywhere and squeals this morning, been there, done that.