To write or read and research, that’s my dilemma. I woke with alarm at 6.15, showered and dressed only to receive news that I am not needed until 7.30. Momentarily frustrated I now enjoy the luxury of time in bed. My writing is lagging behind but planning must be in place to make best use of my time if I’m to push for several days off in a row. I’m an early morning reader but early working has meant no time in bed for reading.  I make lists of half day trips, day trips and note down thoughts around several days away.

The trouble with lists is that I enjoy ticking them off and sometimes the list becomes more important than the thing itself. A short four hour working morning gives me ample opportunity to explore things close by.
Hitching is not so easy today, I reach the post office without a lift so first tick on my list, stop to post postcards. birds for Edward, the bird fan and puffins for poppy who has just seen discovered them. Is there a Faroese theme there by any chance? I ask in the post office if there is a bus timetable but have to resort to taking a photograph of the tattered times sheet I am shown.
Back on the road I nearly exit the village before an air hostess picks me up and drops me off at the airport. Second tick on my list tourist information. I collect a glorious map of the island and find it sprinkled with flowers, buttercup routes, nine of them, tiny roads with scenic views. I love this, not that they are tourist routes yet precisely BECAUSE  they are tourist routes! Roads too small for much general traffic, single track roads, not really hitchable but suddenly they have become transformed with hitching potential because of the buttercups!
I leave the airport to hitch or walk six kilometres to Bour, supposedly the best coastal views of the island, but more importantly for me, to view Mykines, the jewel of the islands in Vagar area, without shops or supplies, fifty people live there. My host has property there.
Yesterday, I asked if I might go there alone to stay for a few days, yes, she said, but not yet. When, I asked but my question hung in the air unanswered, like a bad smell. My tally is now twenty six and a half hours. Twenty five hours earns two days off. It is good we have begun this discussion, she now has half agreed something I really want and I have the beginnings of a plan to bank days off and use them in a block. At the same time I am building exit plans. I need some time off soon. And so it is that looking at Mykines from afar feels very important to me right now. I want to view, for then i will be able to walk away without fretting over opportunities I had missed.
I walk and hold out my thumb, turning to smile at drivers so they can consider whether they might pick me up. A battered car driven by an old man stops. The back seat is littered with tools and an unrestrained child seat whilst the passenger seat holds a young man. Unceremoniously the tools are cast aside and the old man asks of my journey. The young man asks if I’m planning to go as far as
Gásadalur, a mountainous five kilometres further, no, I say, it’s too far to walk as it is if I don’t get a lift. Instead of taking me two kilometres to my turn off they generously take me nearly the whole way to Bøur. Later, when I study my map, I discover that the entire route as far as Gásadalur is a buttercup route.
Through the front windscreen I can see an island, Mykines I ask? Indeed it is and alongside it, the uninhabited, and surely much more attractive, Tindhólmur and Gáshólmur.  The guys drop me just before the settlement of Bøur and I walk in, noticing as I do so the higher road leaving the hamlet that I will need to reach to view Mykines properly. 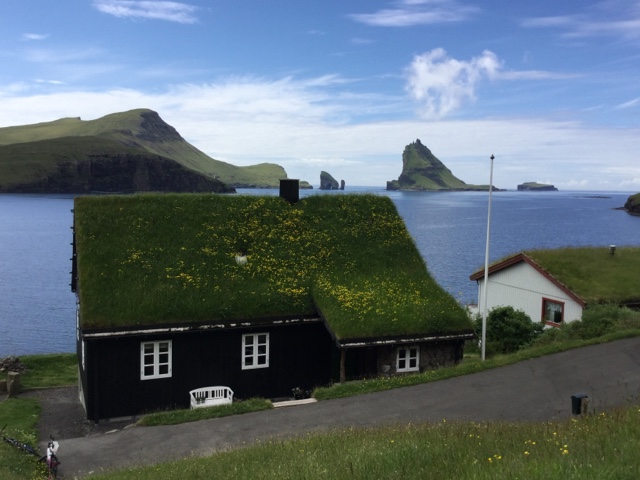 Mykines not yet in view but uninhabited Tindhólmur and  Gáshólmur draw my attention. 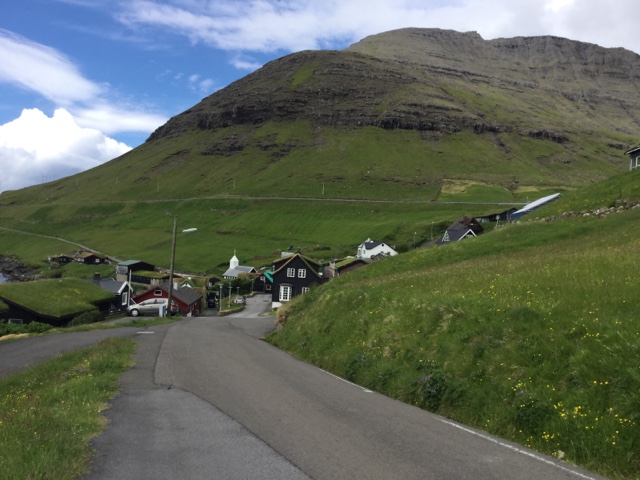 Wandering through the hamlet of Bøur, (tick number three), its just me and the birds, I now know the call of the arctic tern, the whimbrel and oyster catcher. Gulls or gannets torment smaller birds, and I first hear, then see, a small grey peeping bird that I’ve now grown fond of. I walk on, enjoying a mass of yellow and pink blossom beside me in the blooming grass and I yearn to cut it, to try to make hay from it or to see someone doing so that I might ask them. I have found reference to hay but with persistent rain I can’t see how they dry it. I wonder if it might be in the slatted sheds they use to ferment and dry mutton.

Later in the day I will find an old man who, when I ask, will tell me there didn’t used to be so much rain, it used to be possible to make hay he will say, but it’s difficult now. it’s not possible to use the slatted sheds he says. I think of the last two days, both dry and relatively sunny and wonder how long it might take. Making and turning hay as a child I know that a couple of good days will see it dry enough to mound in case of wet weather, to spread again on the next good day. Just as twenty four hour days mean good growing conditions for potatoes perhaps it might also hasten the drying of hay. In his eighties, the old man has many stories of the old days. Stories always give room for a margin of error. I will watch carefully for signs of haymaking.

I can see a house I love, a house I would like to live in and I draw closer. I want to show you yet also want to keep it a secret, my own special place. Good sturdy sward roofing and black timber walls with white paint. The chimney is short, unobtrusive yet promises warmth, there must be a good draw coming in with the wind. And at the top, a skylight, a roof room. That room would be mine but I want to turn it and send it facing seaward. 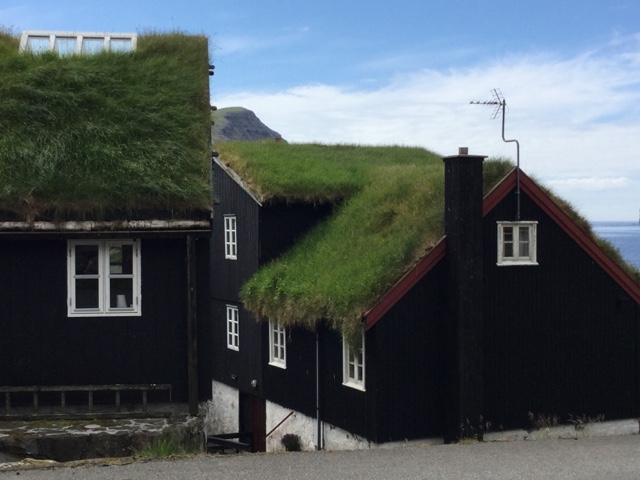 My third cup of coffee and I think back to a travel writing course I went on in london some years ago, Write in the morning, explore in the afternoon and sift in the evening he said. I find it hard not to sift and edit as I go along. I think I may be too relaxed a writer, I love to sit curled up in a chair or, as I am now, laying in bed. My fingers stray and accidentally touch the screen. I find I have inserted hay making in the middle of Mykines and don’t know I’ve done so until it’s frustratingly slow to pick out and move, inserted words splitting other words in half. Typos and autocorrect already make my writing at times difficult to interpret, and I think a detachable keyboard would be useful.
I digress. Feeling prickly at the tone of, ‘not yet’, in response to my query about going to Mykines, I’m happy that I’ve now seen it and I know I could move on from the area without fretting about not having been there. There will be many more such islands. I slept a full seven hours last night, I’ve worked a short day and whilst walking, I’m contemplating my departure.
Walking up onto the high road out from Bóur I am once again dive bombed, this time by Arctic terns. Carry a stick my host has told me, wave that around over your head, don’t shout at the birds. I look around me but immediately know the fruitlessness of doing so. In an island where there are no trees, how might I stumble upon a stick? I try making pretend helicopter hands but prefer to watch carefully and then explode my fists at them. Many have said they will not harm you and I suspect they are right about these terns but later, the old man will tell me that oyster catchers are actively dangerous with their long sharp beaks. I leave the birds in peace at an uninviting pull in off the road. It’s clearly a stopping point for tourists and thankfully the birds have not nested here. I don’t like it as a nesting place anymore than the birds do but settle for it and take my picture of Mykines. 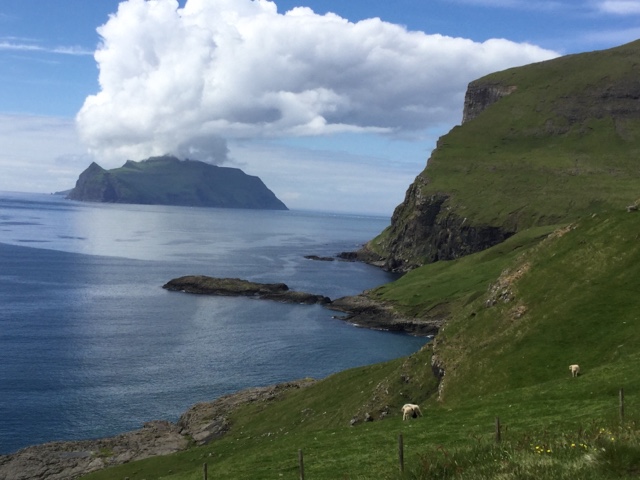 I lean against the grey metal barriers that prevent me tumbling over the edge and wist for a comfy seating spot or patch of grass. Instead of gazing seaward at the beauty of Mykines I perch and consider the cacophony of bleating from the hillside beside me. Gentle slopes become high rocky pasture and sheep there are clearly distressed. I passed a building earlier and hearing anxious bleating, I remember noting momentary alarm, as a man erected waist high boards, wondering if slaughter were going on. It is not the month for the sheep harvest though and for a while I’ve stopped wondering about the noise. Now I take the time to look, I can see that adults have been sheared, lambs still carry their woolly coats. Both mother and child are confused, unused to their new, skin to skin, feel.
It is early, not yet three pm, I wonder how far it is to Gásadalur but not having seen any cars I know I cannot reasonably expect to reach it and return without more miles than I am able to walk. I’m sticking to tarmac today, my right thigh is stiff from my tumble when the Arctic Skuas were attacking me and I’m unsure what surfaces lie ahead. Again, I look for a stick or alternative, but find nothing. The day is mild and whilst the terns are alarming I don’t fear them as I did the skuas and begin to descend.
Bóur is even more attractive on the return journey and miraculously, the birds leave me alone. I wonder about finding a spot in the hamlet to sit and write, i recall a bench but dismiss it remembering it neither faced the hills or the ocean. 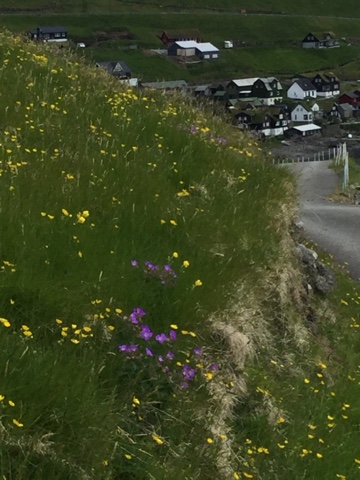 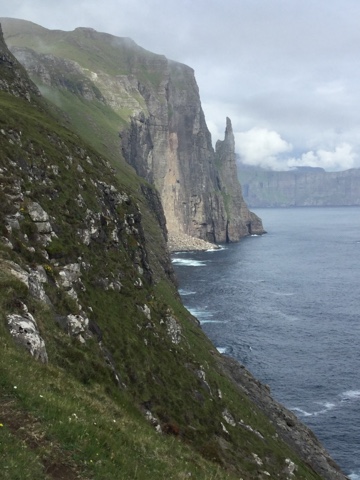 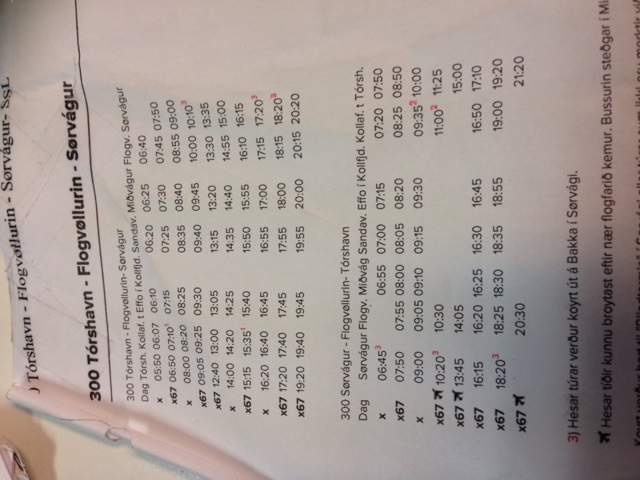