Skip to content
June 28, 2016 Tina Leave a comment
I thought i was done writing for the day but not so it seems. I’m enjoying this never never world. There have been times in my life when I have just stopped, mid journey, for nothing other than to savour the moment of nothingness, of neither departure nor arrival, the living in the moment-ness that can only come half way through a journey, or in the Australian deserts, the great outback, emptiness, nothingness, timelessness, oneness with the Earth and with myself.
Never ending day….Monday 28.06

I posted my  last post then leapt to my feet, In truth, my flight had been called to the boarding gates some time earlier. I stopped to buy water, glanced up and saw last call for my flight. I panicked, remembered a flight once missed and jumped the queue, thankful that the others in front of me didn’t mind that I needed to do so.

I rushed to my gate but it turned out to be a further than I thought. Sometimes corners can be very long. Gate 3, just round the corner, it’s now 25 mins before my flight departs and I suddenly remember the ‘boarding gates close half hour before flight’, panicking now I turn the corner to see the sign, gate closed. I’ve been here before. A woman sat at the desk, faroes, I asked? Thankfully she pointed to the next gate, her own turning out to be 3a and I rushed through. Skin of my teeth.
The flight is more than half empty, I have three seats to myself. We departed more than 15mins before we were due to fly.
I saw little of Edinburgh on my way through, I managed the tram journey without any geographical knowledge of where I was going but dutifully following instructions of strangers, choosing to ignore google advice to catch the T100 bus. Interaction with others never ceases to amaze. Snippets of wonder.
The sky is blue and the clouds thick, I’ve been through the bomb scenario and the locked pilots door scenario. I’ve crashed, blown up, Ive escaped though the slide chute into the ocean and been on fire. the bottom has dropped out of the aeroplane and we have had a major mechanical, caused by the mechanics using quick repair self adhesive aeroplane aluminium tape, a roll of which I have at home. Two rolls to be precise, two different widths, probably the only positive thing that resulted from a damaging relationship with an aircraft mechanic.
I should be watching the window, ten minutes to landing but we have cloud, thick cloud and beneath that, I understand we have rain. I love the sound of the faroese pilots voice, it is deep and guttural, he reminds me of my overnight train journey from helsinki up to finmark. The clouds are now thick and grey, crashing now would be over in seconds, no agonising descent knowing we would die. I hate it I hate it I hate it.
Cloud. Ocean. Cloud. We are very low, I know we are low but nothing is visible. Ocean. Cloud. Cloud. Cloud. The wheels have just gone down and we haven’t exploded, perhaps we will land after all. Cliffs. Green. Rain. Alive. It’s over.
I said I would get a taxi from the airport and my host had not offered to collect me. I leave the tiny arrivals hall, look for taxis or signs for taxis but find none. I ask at the information desk. The girl comes out with me and looks with me and concludes that there are none. She finds someone and speaks to him, he approaches me and offers a lift to Torshavn but declines the job when I show him my address. He says I should have pre booked and tells me I must go and stand on the other side of the road, so I do. No taxis arrive or depart. One by one my flight companions pick up hire cars or are greeted by relatives. I stand in the drizzle and smile amusedly, where else might you find an airport with no taxis.
11.30pm and this is my bedroom window. No curtains and no night, just gloom. A flock of peeping birds just flew across the sky, seagulls sound familiar and cars splash with wet swishing tyres, this is the main road and I imagine will be busy for some time. People laugh and shout as they pass by. 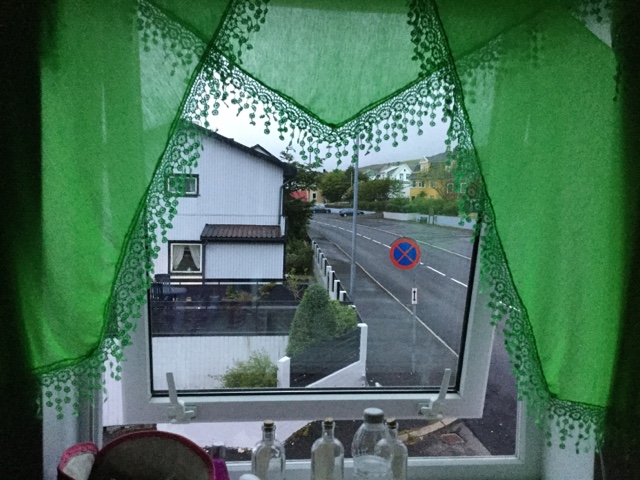 It was something of a miracle when I discovered there are actually two guests due at the guest house this evening and it seems they arrived on the same flight as myself, if only I’d known it. Working for a travel magazine they are here to take photos and write articles, interviewing several people in a busy itinerary. Another Escape is the name of their publication, I wonder if Magenta guest house will get a mention. If all guests are as interesting as this couple, just back from Borneo, this could turn out to be ok.
There is great jubilation that Iceland beat the uk in some football game this evening. My lack of knowledge about the game is construed as covering my disappointment, my protestations about lack of interest are disbelieved.
Bizarrely I understand that several Irish referees will be staying here tomorrow, I haven’t quite worked out why but I’m pleased that there are guests and tasks. It’s somewhat chaotic. my host is not what I expected and not the reserved person I was given to understand I might expect from the Faroese.
Our communication up until now, has not been brilliant, hence the taxi fiasco. it turns out her mother died three months ago and the Facebook person I thought I was talking to is her son who is in stavanger, Norway?? Apparently, he sent me a Facebook message, half way into my flight, saying his mother would pick me up, which needless to say, I did not get. The upshot of their being no taxis was that the man the information desk girl spoke to, decided to fleece me by charging me £20 for a five minute journey, I was happy to pay. Meanwhile, unknown to me, my host went off to the airport looking for me (and the new guests) not knowing that we had arrived nearly half an hour early and none of us would be there.
I was dropped off by the ‘taxi’, recognised the building as magenta guest house but found no one home. It was raining. I have four different phone numbers for Marita but none of them worked. I went round to the back of the building, climbing steps to the first floor where lights were on, I knocked but still there was no answer. Slightly perplexed and miffed, I pondered on the idea of just walking away and putting my thumb out, going who knows where, but before I did so, tried the door. I’ve stayed in many remote places around the world where doors are never locked and it turned out this was one of them.
I entered and sat down wondering what to do. My phone was nearly dead so found a socket and put it to charge. I nosed around a little bit and then sat down again, still wondering what to do. And that’s where Marita found me, sitting in her guest house having given up on trying to find both me and her guests at the airport!
About half an hour later, the guests arrived, having hired a car! Like I said, it’s chaotic! It’s now 12.30 and there’s no change in the light. 1.30 and no change in the light. I turn my bed so I sleep at the foot, I am less in line with the window. Cars and people have not yet abated. I will sleep at some point but I know that just resting is good.